Dubai Tests Electri Buses that Can Pick Up Charge While on the Move(Feb 19, 2020 Electronic Dseign) 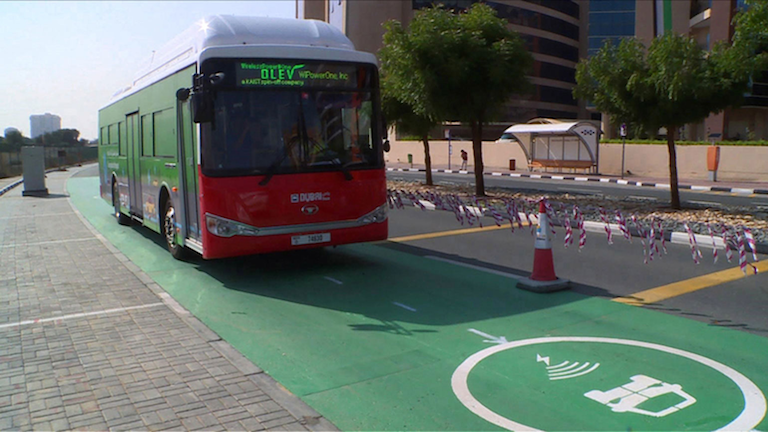 Current battery technology provides a limited travel range with high cost, long charging times, and low operating efficiencies due to battery weight. These issues must be dealt with in order to increase adoption of electric vehicles (EVs) in both personal and public transportation.

To address battery-related limitations, the concept of dynamic wireless-power-transfer-enabled EVs has been proposed in which an EV can be charged while it’s in motion.

In Dubai, a wireless technology that helps an EV become charged while parked on the road or in motion is now on trial. The wireless-charging unit is embedded beneath a 60-meter road stretch in the city and uses shaped magnetic field in resonance (SMFR) technology to enable seamless operation of the vehicle without having to stop at charging stations.

In operation, the SMFR charging mechanism is activated only when an EV runs over it (a sensor on the road detects the EV), so that other vehicles will not be hindered by the magnetic field. When the vehicle is over the charging mechanism, a power inverter installed on the road lets current flow, generating an electromagnetic field (typically in the range of 20 kHz). Electricity comes from the grid (most often three-phase 380 V or 440 V).

A pick up coil made of a ferrite core and coiled with copper wires tuned to a resonant frequency is installed underneath the vehicle to collect the magnetic flux. The coil is designed to have maximum exposure to the generated magnetic field, which has an optimized shape for the same purpose. Thus, it increases transmission frequency and reduces magnetic field leakage outside of the space design parameters. 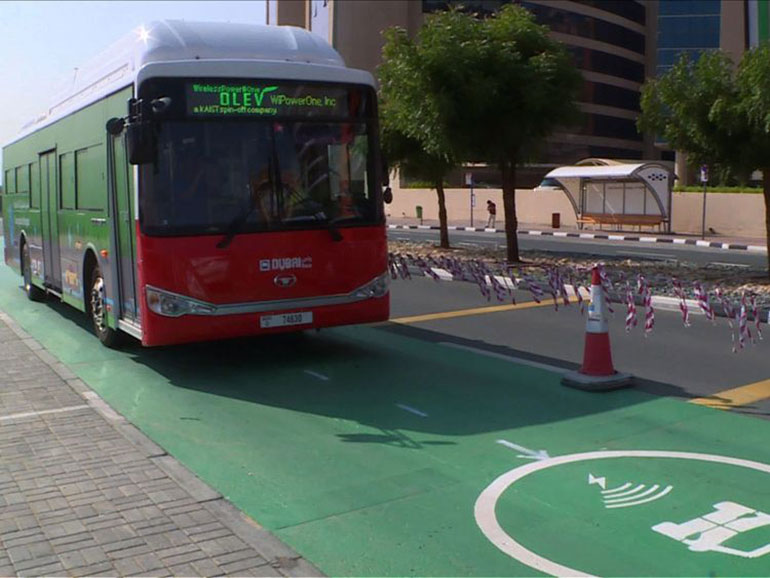 < The Roads and Transport Authority (RTA) of Dubai has started a trial run of dynamic charging of electric vehicles and buses using magnetic-resonance technology. (Source: RTA) >

After the induced current of collected magnetic flux is converted into dc power, a power distribution unit (PDU) then distributes it to the appropriate sectors within the vehicle. What’s more, the weight of the battery pack can be reduced as the required energy storage is lower if the vehicle can be powered wirelessly while driving.

Embedded under the road, the system doesn’t hamper the movement of people and vehicles and has no visual contamination impact on the city. Moreover, the electromagnetic level onboard the bus is said to be “within the accepted global range," according to Mattar Mohammed Al Tayer, Director-General and Chairman of the Board of Executive Directors of the Roads and Transport Authority (RTA).

RTA has tested an electric vehicle and a bus on this path, and results “proved a highly efficient wireless-charging system comparable with cable charging," said Al Tayer.

In a statement, the RTA said the initial phase covers the preparation of the infrastructure and placement of an integrated energy charging network under a road strip for dynamic wireless charging of electric vehicles and moving buses. However, there are no immediate plans to implement the system on a permanent basis, as the technology is said to be “still evolving.”

The RTA is collaborating with the Dubai Electricity and Water Authority (DEWA) and the Dubai Silicon Oasis free zone on the project. DEWA has already installed more than 240 charging stations for electric vehicles across Dubai, with plans to boost this number to 300 by the end of the year. DEWA also has extended a free charging period for electric vehicles until the end of 2021. The incentive applies to non-commercial users who register for the EV Green Charger initiative and is exclusive to DEWA’s public charging stations.

Authorities in Dubai are taking further steps to promote the use of eco-friendly modes of public transport. The RTA is converting 90% of Dubai limos into environmentally friendly hybrid-electric vehicles by 2026 and 50% of Dubai taxis into hybrid vehicles by 2021. It has also launched a trial run of the first electric taxi powered by hydrogen fuel cells as part of the Dubai Taxi fleet. The hydrogen fuel-cell vehicle is noiseless, has zero emissions (only water emissions), can travel 500km on a full tank, and a refill takes only five minutes.
List

Next
Unwired e-buses and robots allowed on ro...